Flying into the Past 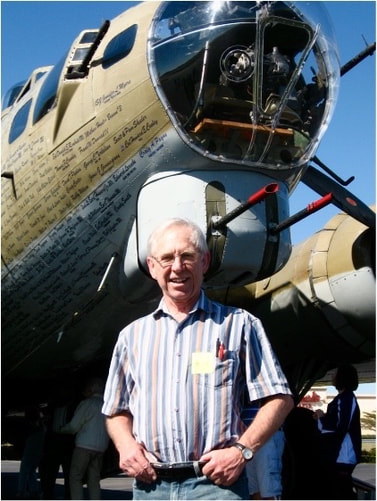 Ian started writing his first book about aviators who survived ordeals after he wrote a story for his newspaper about his uncle, George Darling. A bomb-aimer on a Halifax bomber, his uncle was shot down over the Netherlands and became a prisoner of war in Germany. In 2009, Dundurn Press of Toronto published the book, entitled: Amazing Airmen: Canadian Flyers In The Second World War.
Because of Amazing Airmen’s success, Ian decided to write a book of stories about American aviators who survived ordeals. He left the Record in 2012 to work on the book as a full-time author. Having published that book, Ian has now started writing a book about Vietnam veterans who took risks to help their comrades or civilians.
Ian comes from an air force family. His father as well as both of his uncles served in Britain's Royal Air Force during the war.
Before he started writing Amazing Airmen, Ian wrote a different kind of book, Go Ask Dad: Fathers Are Nice Guys. Published by Mosaic Press of Oakville, Ontario, in 2004, Go Ask Dad is a book of humorous essays about fathers. Ian previously taught writing courses at least once a year at Wilfrid Laurier University in Waterloo, Ontario. He now give lectures on writing and books, and has spoken to groups such as the Canadian Authors Association, the Word Guild and Word on the Street.